Last Friday June 2nd was “National Donut Day”! Yes there is such a thing, in fact there are two every year! This might be a cause for celebration!

The first Friday of every June is National Donut Day. This began in World War I by volunteers who wanted to deliver food to the soldiers on the front lines in France. More than 250 women were sent by the Salvation Army who would use the soldier’s steel helmets to fry the donuts. In 1938, the Salvation Army honored these “doughnut lassies” by recognizing an annual pastry holiday that could also raise awareness and funding for the Salvation Army’s charitable efforts.

The other National Donut Day is November 5th who’s origins can be found in the Ladies’ Home Journal from the 1930’s. If for some reason you happen to miss either of these days don’t worry too much because June 8th is National Jelly-Filled Donut Day, and National Cream-Filled Donut Day is September 14th! So mark those days on your calendar be prepared to celebrate your favorite donut!

In the meantime last Friday (June 2nd) Ashton, Hanna and Valorie volunteered for an impromptu photoshoot and to have a little fun celebrating National Donut Day, below are the images from that shoot! 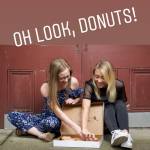 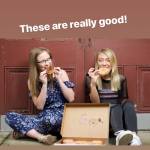 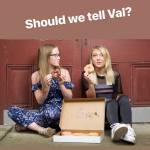 Sometime back in the fall maybe Oct or Nov I met this Gracie, Gracie K… who is best friends with another Gracie, Gracie S. I don’t remember the exact date in Oct of 2014 I received a call from Gracie S, who’s image you’ve seen by now. Gracie S. was down in the dumps because of a tragedy that had occurred and she wanted to do a shoot, something special for Gracie K. Well, as you know by now I love working with Gracie S so it didn’t take much of an excuse for me to want to hear more. When she told me that the week earlier Gracie K’s mom has passed suddenly, I knew whatever we did, it needed to be something special and I was fully on board.

Portrait of Gracie K taken during the first of two sessions. This was her fist time in front of the camera in a studio session such as this. Seeing the image you see one type of beauty. But seeing and knowing Gracie K you’ll know that beauty is greater than skin deep.

So we set up a board on Pinterest and started loading up the ideas for the shoot. I have to admit though, it was Gracie that was coming up with the ideas and that she was really the one filling up our board. Frankly I loved her idea(s), they were fun, this was going to be an amazing shoot! We actually did this shoot over two sessions several weeks apart.

You don’t get to see those images just yet. Well, except for the portrait of Gracie K that is. The other images from the shoot will be available soon though. I’m hoping some of them will be published in the near future.

I’m so glad I had the opportunity to not only meet Gracie K but I got to know her. I feel just a little richer having done so.

If asked to give a description, all I can say is that Gracie K is an amazing person and that she demonstrates clearly that beauty can be greater than skin deep.

Gracie Sapp – Miss Teen Kentucky USA 2013. From a photo shoot in December 2014. Gracie is my goto model, she’s amazing and I care so much about this girl. You can see more images of Gracie on my website http://www.jimtincher.com

I love my job as a photographer, I get to meet and work with so many different talented people. Each one has that something special which makes them unique. Sometimes along the way you run across a person that stands out just a little bit more than the others. There’s a connection that happens between you that’s really special, and you find that working on and developing projects is smooth sailing, and when it comes time to get the shot, it’s effortless.

I’ve been asked so many times, “what’s your favorite image”? Who do you like to work with the most? Who is your goto model? I generally don’t like those types of questions as I’ve enjoyed working with everyone that I’ve worked with. But to pin it down, then that answer is simple. If you’ve seen my Twitter, Instagram (both @jimtincherphoto) or my photography page you’ll notice that they are all covered with this girls face. I’m not sure how many models I’ve worked with in the past, they’ve all been wonderful. But when asked who my favorite person to work with is, you already know the answer. Gracie.

This was taken from a recent photo shoot. This image isn’t scheduled to be published but several images from that shoot are.

When you meet a model for the first time you never know how the shoot is going to go. Recently I had a shoot with Caroline. Several months ago we became friends on Facebook. I had always liked her look and knew at some point I wanted to work with her. We chatted several times over the course of several weeks and finally the opportunity arose for us to get together.

Just one image from our recent shoot. Nearly a random photo, all her images are this good! You can see this and other images at http://www.jimtincher.com

As we were planning our first shoot I had already made up my mind to shoot with her a second time on a project I had been wanting to do for a long time. I talked with my designer and we discussed things in general and, lets just say that there is a future blog in the works.

Finally the day came for our shoot and all I can say is WOW! Caroline is such a wonderful person! Before we had actually met I already knew that at 17 she had accomplished quite a few things such as: starting her own charity at age 12, a Miss Kentucky Teen contestant, graduating HS early and many other accomplishments.

Needless to say, everything I had thought she was, she was, and more…. she exceeded all my expectations of who she was and my expectations were already lofty. Meeting and working with young people such as Caroline is always a pleasure. Young women such as her should give us all hope that there are some very grounded soon to be adults that are future leaders.

Back to the photo shoot. As we were shooting we would review after each session and I didn’t say too much at the time but I could tell we were getting some great images, I may have let that on just a little bit a time or two. As we shot, I kept talking with Caroline about expressions and how I wanted her to look into the camera, and as we progressed the images kept getting better and better and the shoot really began to flow. I felt that I could have shot several more hours but it was getting late in the day and I knew she had a long drive ahead of her. So we hugged and said our goodbyes.

Last night, I finally had a chance to sit down and really go through these images after having been delayed in doing so by other projects and interruptions. All I can say is that I have a difficult task ahead of me. I’m not sure how long it will take for me to cull these images to just a few because I love them all!

I will be posting more images of this shoot soon, you can view them on my website, http://www.jimtincher.com

Caroline was recently named a WBKO-TV “Hometown Hero” in Bowling Green, KY for her event “Will Sing for Food” that serves the American Red Cross. See her interview here https://www.youtube.com/watch?v=V1SYQQD-6WE